Standing majestically on the apex of a hill in ‘Colle Val d’Elsa’ in Tuscany, is San Gimignano. Many towers, which once numbered as many as seventy-two, reachtowards the sky.

In the heyday of San Gimignano, the towers were built by wealthy nobles and merchants to inspire the population and to awe their rivals, as to the power and prestige of their own town. Some of the towers once stood as tall as fifty metres and were comparatively close to one and another, so much so, that today, San Gimignano is often referred to as the ‘Manhattan of the Middle Ages’. 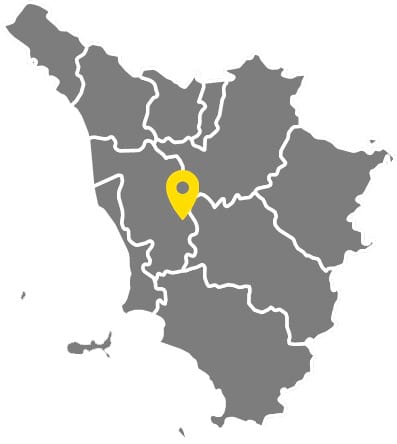 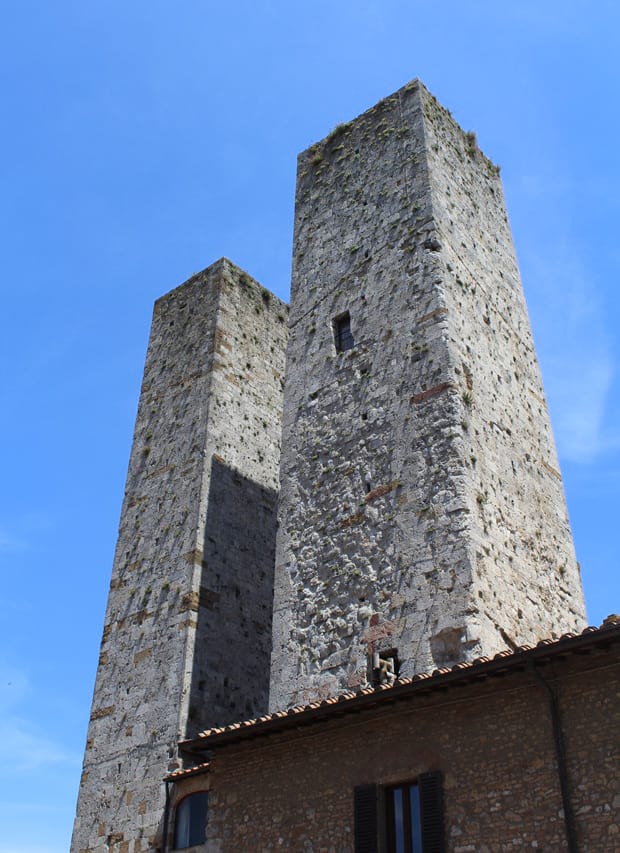 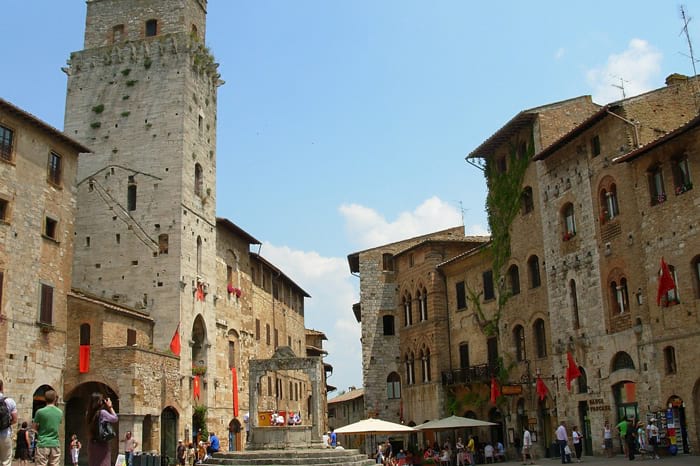 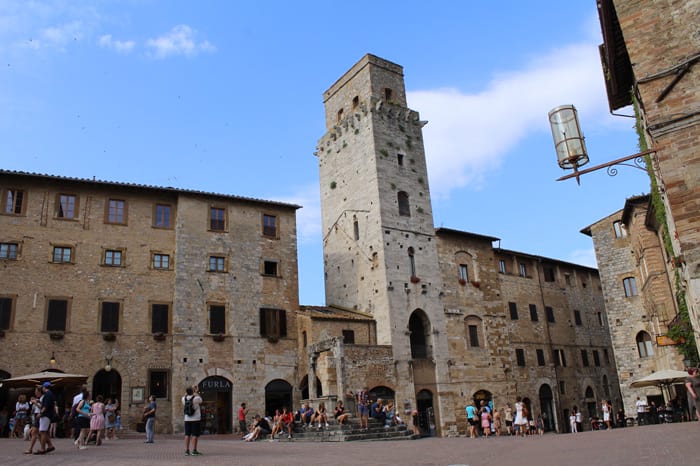 Aside from the towers which have made San Gimignano famous, the town has a rich history and in 1990 became a ‘UNESCO World Heritage Site’ principally for the frescoes within the Church of San Gimignano, in the ‘Piazza del Duomo’, named for St Geminianus and consecrated in 1148, hence the town’s modern name. The frescoes were painted by many notable artists of the time. San Gimignano is also noted for its medieval architecture and layout which has not changed since that period, so many unique details remain, which have also contributed to the town’s listing by UNESCO. With its connection to the local viticulture, principally the cultivation of the ‘Vernaccia’ vine and the resulting white wine made from its fruit, San Gimignano is a true gem in the heart of Tuscany.

At Tuscany Destinations we are at your disposal to help you enjoy your visit to San Gimignano to the fullest. 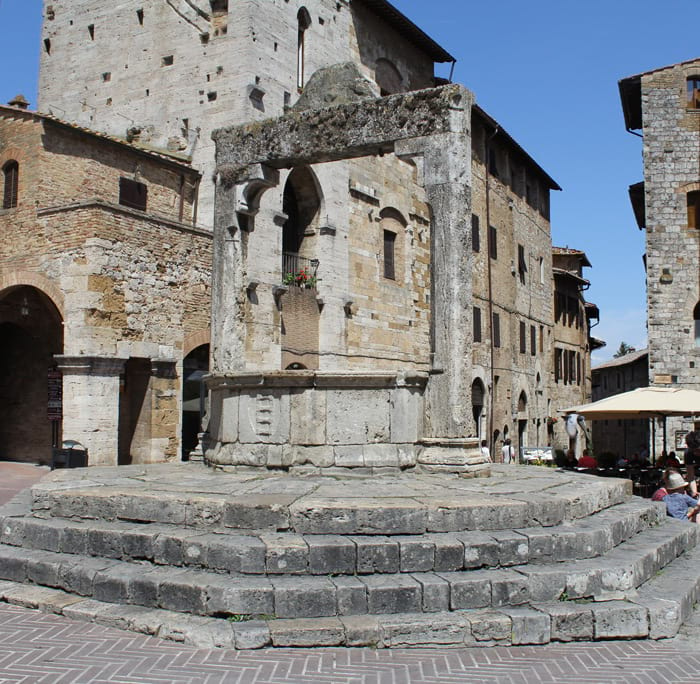 A History of San Gimignano

As with many other hamlets, villages and towns in Tuscany, San Gimignano is of Etruscan origin. Being located on a hill the area was originally settled by peoples in ancient times, who chose it for its strategic importance. The first mention of ‘San Gimignano’ is from a historical document dating to 929. During the medieval period, San Gimignano retained its strategic position and was also an important stop along the ‘Via Francigena’, the pilgrim route to Rome, giving respite to the pious, like many other villages and towns in Tuscany.

During the 14th Century San Gimignano began to decline due to internal political struggles, the plague and a famine that followed in its aftermath. The population was devastated, and the town gave up its autonomy and came under the rule of Florence. Despite this, during the 14th and 15th Centuries many important works of art were commissioned from the great master artists of the day.

Fast forward to the 20th Century, San Gimignano was unfortunately hit by American bombardments during the Second World War, and the bell tower of the ‘Torre Grossa’ (Big Tower) was destroyed along with other buildings. The bell tower was rebuilt and, step by step after the war, San Gimignano also began to be appreciated for its extraordinary architecture and its historical treasures. Thus, the town is one of the ‘must see’ destinations in Tuscany!

What to See in San Gimignano

The seventy-two towers in the Middle Ages became reduced to twenty-five by 1580, and today there are no more than fourteen surviving towers remaining. Still standing proud, they give a good idea of what San Gimignano in Tuscany must have been like in its prime. The oldest tower is ‘Torre Rognosa’ that was built around 1200 and highest tower is ‘TorreGrossa’ at fifty-four metres in height. However, San Gimignano is more than the towers scraping the sky and there is so much more to see on a walk through this magnificent medieval town.

Of the sights to see in San Gimignano, is the Church of St. Geminianus in ‘Piazza del Duomo’ containing masterpieces by Jacopo della Quercia, BenozzoGozzoli, Tadeo di Bartolo, Benedetto da Maiano and Domenico Ghirlandaio from the Florentine school of painters, to name a few.

This church is considered one of the best artistic heritages in Tuscany. So beautiful is the interior it was used as a location for the film ‘Tea with Mussolini’ (1999) starring Cher, Dames Judi Dench and Maggie Smith! The ‘Palazzo Comunale’ or ‘Palazzo nuovo del Podestà’ as it is also called, is another must-see building in San Gimignano. Today it houses the civic museum and art gallery where paintings by famous artists, Pinturicchio, Filippino Lippi, Domenico di Michelino, and Pier Francesco Fiorentino are to be found. At Tuscany Destinations we are here for you to help you get the very best out of your visit to San Gimignano.

Now wine! More precisely, Vernaccia, the grape variety that is the soul of San Gimignano.

‘Vernaccia di San Gimignano’ is a white wine that can be traced back to the 12th Century, but it was only mentioned for the first time in tax documents in 1276, found in the San Gimignano Municipality. The name is believed to come from ‘vernaculo’ an Italian word meaning ‘local’, ‘common’ or ‘indigeneous’. The English word ‘vernacular’ comes from this origin. Indeed, there are many grape varieties and wines in Italy called ‘Vernaccia’ but it refers to the fact that the plant or wine is ‘native’ to that area and not related to the particular grape variety in San Gimignano. Thus, thanks to the vine and the flinty soils around the town giving it its unique ‘terroir’ the Vernaccia di San Gimignano has always been a noble wine. It has been the favourite of kings, popes, nobility, politicians, rich merchants and poets, amongst others. Even Lorenzo de’ Medici was a big fan of Vernaccia wine and asked for it to be sent to Florence specifically.

Vernaccia di San Gimignano was the first wine in Italy to be granted the DOC (Denominazione di OrigineControllata) in 1996, before any of the other great wines of Italysuch as ‘Brunello’, ‘Nobile di Montepulciano’, or ‘Barolo’ were awarded DOC appellation. In 1993, Vernaccia wasgranted DOCG (Denominazione di Origine Controllata e Garantita) status. 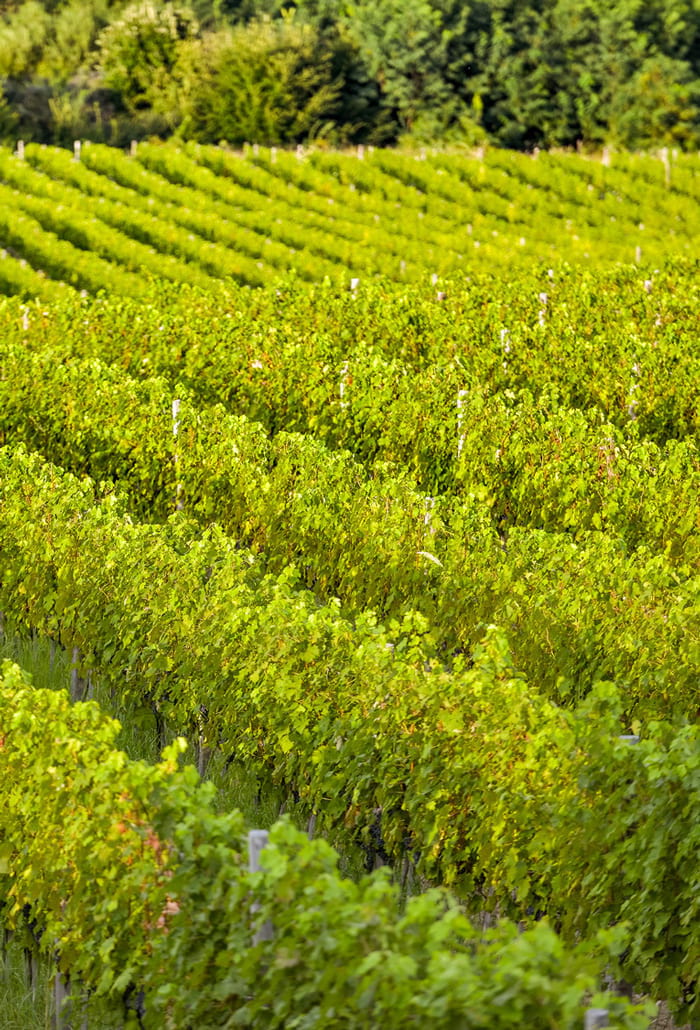 A wine that is a beauty to sip on 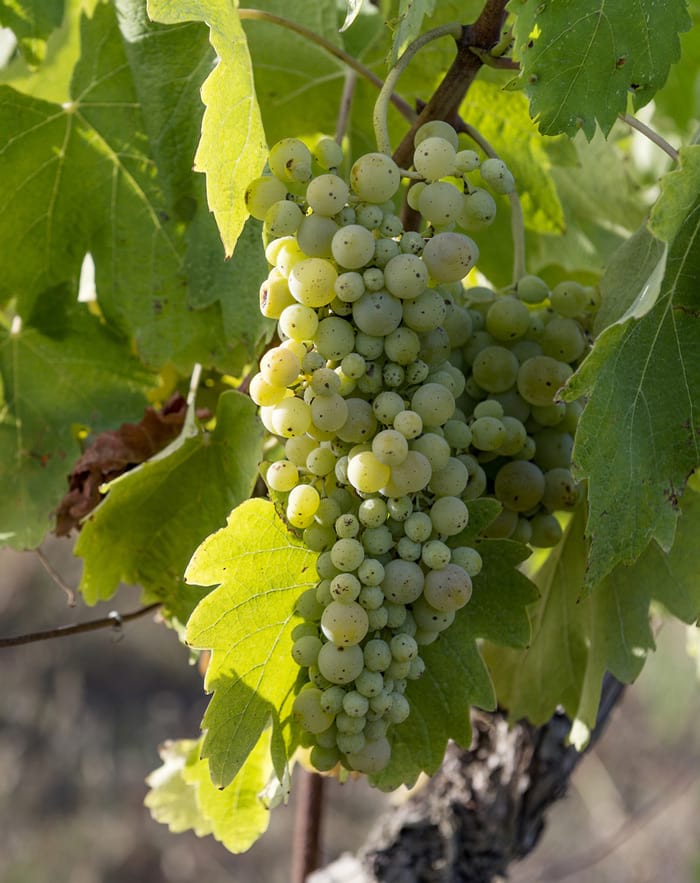 The Vernaccia di San Gimignano wines were in the past released onto the market quite young which didn’t allow for its full potential to be realised and only the aficionado would know how to look for the best and how long to keep it before drinking. Although in general it is well known that white wines in general are consumed earlier than reds, Vernaccia needs time to develop its aromas, colour and depth of flavour. The trend over the last fifteen years or so has been to mature the wine a little longer in oak or steel barrels. Nowadays, many wine producers are making wonderfully excellent Vernacciadi San Gimignano wines. The ‘Riserva’ wines are often matured in oak barrels though the use of ‘amphorae’ for fermentation has not been unknown!

The whole process done well produces a Vernaccia di San Gimignano that is a crisp with a mix of floral, fruity, and herbal notes, that with aging becomes structured and smooth. After several years there can be a nutty and caramelized note to the wine. A typical trait of Vernaccia is that it has aslight bitter, almond-like finish.

Did you know that the ‘Consorzio di Vernaccia di San Gimignano’ (the trade association protecting the heritage and quality of the wine) organised,some years ago, a blind tasting for wine journalists where aged Vernaccia di San Gimignano and Chablis wines were compared in competion? The result was that the Vernaccia stood up to a well-known foreign competitor. Despite this, this particular white wine from this most specific of ‘terroirs’ is surprisingly, not that well known outside of Italy. All the more for those in the know then!

Ask us at Tuscany Destinations for advice about which wineries to visit. We are very happy to help organize your tour of the Vernaccia di San Gimignano wineries. 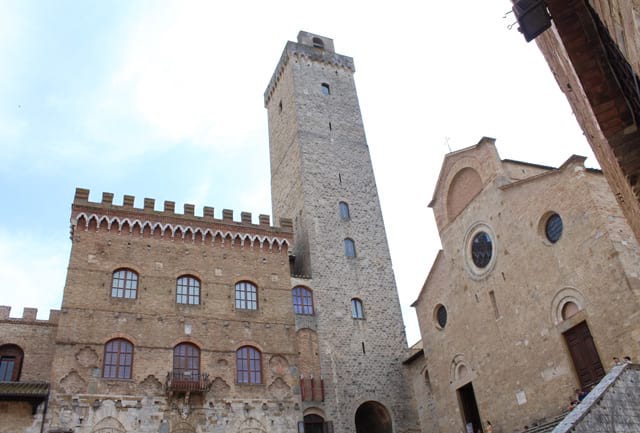